Add To My Library

An Analysis of Newspaper Columns in Albayrak, a Strong Voice in the National Struggle

This study is about the newspaper Albayrak, which was published in Erzurum during the National Struggle. The study, which contains detailed information about the newspaper Albayrak and has a unique character in this respect, tries to understand the role and function of the newspaper Albayrak in the context of the historical and social conditions of the period. In this respect, it is aimed to reveal the content map of Albayrak and to reveal the role given to the press of the National Struggle in the context of the newspaper columns. For this purpose, the entire newspaper in general, and the columns in particular, have been analyzed by content analysis method. In this direction, it is assumed that the columns in Albayrak have an important function in announcing the spirit of the National Struggle and informing the public. At the end of the analysis, it was understood that the columns in the newspaper contributed to the development of a common feeling in the context of a national stance, played an important role in the creation of social solidarity and integration, and the emergence of a collective spirit. Therefore, it can be said that Albayrak fulfilled a function that activates the resistance power of the nation with its columns. 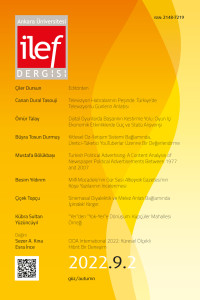